With a rather anticlimactic work order and some heavy machinery, the flashpoint of those events in Charlottesville is removed… but the lies linger on.

Nearly four years after the drama unfolded, and one year after American cities were lit on fire, the Robert E. Lee statue in a park so central to the drama has been taken down, not by a mob, but in an orderly removal voted on by city officials.

And there it goes: Charlottesville VA's Robert E. Lee statue has been removed. pic.twitter.com/qI4xhnIqJ3

For the way the phrase ‘Big Lie’ has been kicked around, you might almost forget that the cornerstone event Joe Biden claimed to have founded his entire campaign on — the events of Charlottesville in the summer of 2018 — are rooted more in myth than in fact.

If the press were honest, they would want to set the record straight. But it hurts and helps the right people, so they have no interest in amplifying the truth. Why would they, when the lie is so much for useful?

After all, this is the moment in his presidency during which the entire Never-Trump framing switched gears from anti-woman (remember those ridiculous knit hats?) to claiming he is a white supremacist. When Trump calls the press ‘fake news’ or calls out the ‘fake’ news as the enemy of the people, this is the sort of complaint that is driving that.

We all have access the transcripts of what Trump actually said. He was answering a question from Jim Acosta, so nobody has any excuse to pretend they don’t know that Trump explicitly condemned racial bigots by name less than 60 seconds after their favorite ‘gotcha’ clip. They just make a point of dropping that part because leaving that out gives them room to write a more damning narrative.

Here at ClashDaily, we knew damned well how the media was going to use this to play one group against the other. Yours truly wrote the following story on August 13, 2017: Dear Charlottesville Rioters: You Idiots Just Set Things Back 50 Yrs It’s a piece written in response to the riot that holds up well almost 4 years later.

This will give you a taste of what that article said, but at the risk of patting myself on the back, it’s well worth looking back at the whole piece to show that, far from being the White Supremacists the left WANTS to paint us as, we on the Right were denouncing those clowns right from Day One. We also knew EXACTLY where the press wanted to go with this narrative.

Ever since the height of the Tea Party they have been trying to paint us as violently racist. They were trying to create the impression that bigotry is the engine that drives our politics.

And then you blew it at Charlottesville.

…Their side is getting caught for racist stupidity left and right.

Don’t you see? They were imploding.

They were losing public support left and right!

Why did you dumb bastards let them bait you?

You dressed up in the KKK dunce cap.

And carried a swastika… the exact two symbols they were desperate to see you hold in your hands. They just won the propaganda war, and the morons who did this are too dumb to realize it. — ClashDaily

Sadly, I was right about the propaganda war. But they couldn’t have done it without a Big Lie.

The Federalist does a good job of explaining how this has been leveraged into a hit piece, and their summary of the quote:

Shortly afterward, President Trump clarified and unequivocally stated his condemnation of white supremacists: “I’m not talking about the neo-Nazis and white nationalists because they should be condemned totally.”

We have called out the Democrats and Joe Biden himself for this obvious slander time and again.

Three different groups showed up. One of them was the ragtag group of actual racial extremists who marched with tiki torches. These people were NOT locals, they came in from whatever rocks they crawled out from under.

Joe Biden dishonorably slandered ALL of the protesters not affiliated with Antifa that weekend as being aligned with the bigots. That, right there, is the REAL ‘Big Lie’.

There was another group of locals who — for whatever assortment of private reasons they held, whether their love of history or wanting to learn from it or not wanting to further dishonor forefathers who fought for the losing cause — believed that the statue should remain in the park.

They followed all of the correct legal processes in setting up a lawful demonstration.

Word got out about the events that weekend to the same ‘black block’ type groups of political agitators who had been organizing violent clashes and burning buildings since Inauguration Day (and long before that). They probably showed up in response to the tiki torches crowd. Suddenly this lawful demonstration by locals was crashed by two outside groups who had no local stake or interest in this park itself but had come for other, more ominous reasons.

The Antifa-type group wearing black outfits, carrying weapons, and wearing helmets did not go through the same steps to register their protest that the locals had. Police did not go to any great lengths to keep the groups separate.

There happened to be a choke point in the official path the pro-statue protesters were allowed to follow as they made their way from one point to another, which had a short, narrow staircase with an immediate turn at the bottom. It was at this choke point that the one young, athletic, shirtless protester was spraying gouts of flame at the passers-by. 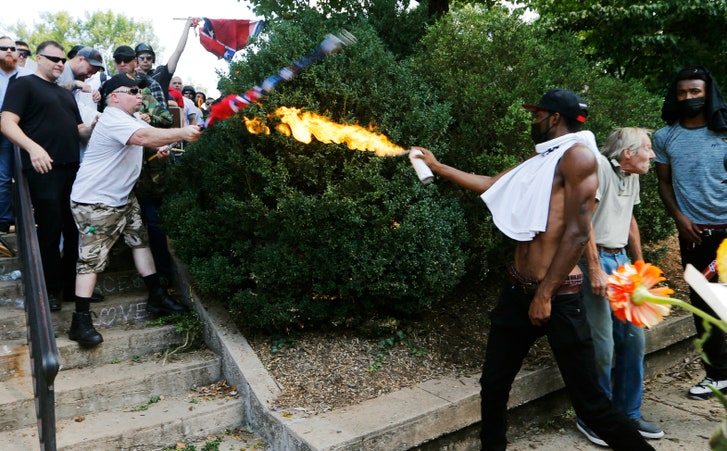 Even in the photo, you can see that the flame was extending onto the sidewalk, and people were hesitant to step forward into that flame, with the crowd coming to a standstill at the unexpected obstacle.

One older guy was provoked. From the steps, he swung the flag he was holding toward the guy holding the fire. Caught up in the moment, he would not have been thinking about symbols or narratives. But — whether his intents were defensive or otherwise — the specific flag he was holding was precisely the wrong ‘symbol’ to swing as a weapon… especially against that particular guy.

That was exactly the narrative the press wanted, and they ran with it, lionizing the guy with the fire as some kind of a folk hero. Forget the fact that video from the day showed he had been taunting the marchers who had been quietly filing by with this flame before the flag was swung. None of that matters to a unified narrative.

Whether that was the trigger, or something else was, all hell broke loose. The clash between the two crowds wasn’t polite. There was give and take on both sides. Probably both sides went home nursing injuries thereafter.

But one event made this event different than the others. The guy who drove his car into the crowd.

Time and again, we hear from the press how events of the day were ‘lethal’… the same press who like to downplay the violence of (for example) BLM riots that have produced a body count well into the dozens over the last year.

What happened in the case of this one person killed in the conflict of the day?

This was not part of some coordinated action. While he had come for the protests, this happened away from the people with whom he was aligned.

This was, simply put, the singular decision and criminal act of one guy, James Fields Jr., who has since been charged and convicted of murder. He faces life in prison.

If Fields had been aligned with a movement on the left, the press would be quick to dimiss his actions as nothing more than the actions of someone with ‘mental health issues’. He was diagnosed as bipolar at age 6 and had what is being described as a ‘traumatic childhood’. Kamala might even have helped raise bail or a defense fund.

None of these details matter to the left. The clash in Charlottesville was by no means the beginning of their recent pivot to leveraging racial division for political gain. This was just the latest step in accelerating the process and kicking the heat up a notch.

Let’s remember what else Trump said in his deliberately misquoted ‘very fine people on both sides’ message. Trump rightly predicted that cancel culture was not going to stop with General Lee… but that they would come to wipe away other historical figures and American History as we know it. They derided him then, but wasn’t he proven right?

Isn’t that exactly what the 1619 Project set out to accomplish? Now with Joe Biden’s help, they are well on their way to doing just that.

Funny how wiping away the ‘inconvenient’ pieces of US history mirrors every authoritarian regime of the 20th Century, isn’t it?