If you don’t know what the ‘autistic screeching’ meme is, you don’t hang out on Reddit or 4chan. (Neither do I, but it’s funny what you find when researching things on the internet.) 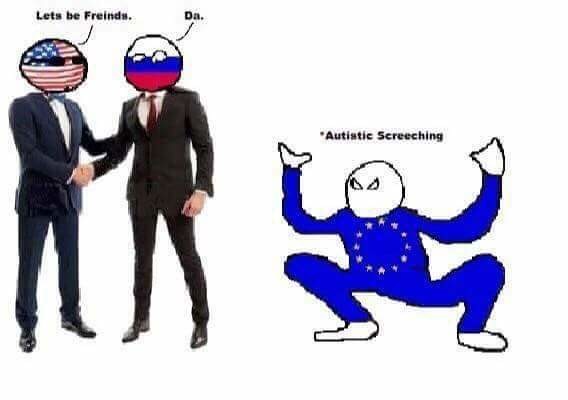 Yes, it’s a horrid assault on the eyes.

But there does seem to be some truth there, no?

It reminds me of the shrieking protesters that cannot handle Donald Trump being the President.

And now, it’s not just screeching, the word they’re using is ‘Impeachment’.

Is it just me or do you hear the word ‘Impeachment’ in Maxine Water’s voice now?

But it’s not just Mad Maxine Waters that is shrieking it incessantly.

The Media (D) has jumped all over the ‘Trump shared classified info with the Russians’ story and is gleefully pushing the idea of ‘impeachment’.

Since the Washington Post’s report Monday that President Trump shared classified information with the Russian ambassador during an Oval Office meeting last week, the major media seems to smell blood in the water. Over the last 24 hours, almost every interview with Democratic politicians has included a question about whether we’re getting closer to impeaching the president.

(Also, check out the Grabien video montage of the Media (D) suggesting Impeachment.)

Blitzer first brought up impeachment with Sen. Angus King (I-Maine), then flatly stated that if the New York Times article was right, and President Trump had asked then-FBI Director James Comey to drop the Russia investigation, it would be ‘an impeachable offense’. The third mention was when Blitzer asked Rep. Elijah Cummings (D-Md.) if the New York Times article was enough evidence to begin impeachment proceedings — ‘Is that impeachable if it is an obstruction of justice?’ was the query.

Here is the segment with Rep. Elijah Cummings:

Now a few of the ‘normies’ are doing it, too.

Case in point, David Gergen, a CNN Senior Political Analyst — and Republican — was on Anderson Cooper’s show on Tuesday and actually said that we are in ‘impeachment territory’.

But, just like Maxine Waters, Nancy Pelosi, the rest of the Democrats, the Never-Trumper Republicans, the RINOs, the rest of the Media (D), the Obama-admin holdovers that are leaking info, the ‘Resistance’, whiny celebs, and every other Anti-Trumper out there, you go on ahead with that.

It’s just all just white noise at this point.

Or, they’re all starting to sound like Maxine Waters.

What concentric circle of hell is that?