Imagine a world where you have to choose the lesser of two evils in a mayoral race — and you pick Wheeler. Welcome to Portland!

This is the point at which most of us would be dialing 1-800-UHAUL.

Portland is the city where a guy who calls himself ‘100% Antifa’ is being floated as the key suspect for the political execution of a Trump supporter just last weekend.

If you missed it, we covered that in these stories:

Keep that in mind as we look at what Portland voters are faced with:

Portland’s next mayor could be an open supporter of Antifa, the violent, far-left movement whose members have unleashed violence in cities across America.

Left-wing activist Sarah Iannarone will face incumbent Democratic Mayor Ted Wheeler in a runoff election on Nov. 3 after neither candidate received a majority of votes in the first round of voting.

…Iannarone, whose platform includes a “Housing for All” plank and a pledge to slash the city’s police funding, identified herself as a member of the Antifa movement in a January 2019 tweet.

“To those who say Antifa are violent thugs: I am not a violent thug and I am Antifa,” she wrote.

Try explaining that to the guy Antifa murdered in Portland. The guy who was ‘hunted down’.

It might be simpler to sum up who we’re dealing with by just showing her pinned tweet: 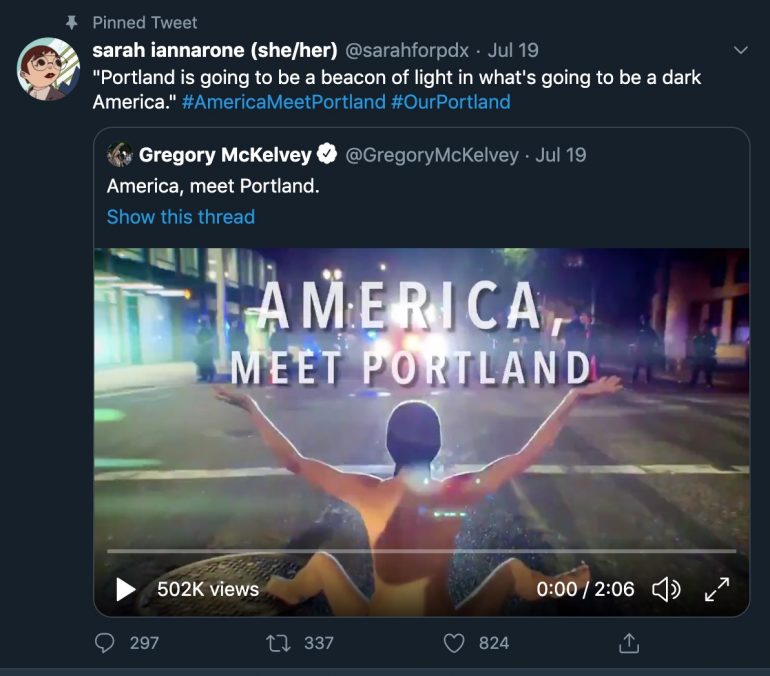 Yes, you are seeing what you think you’re seeing.

That is the same naked chick who ‘bravely’ flashed her naughty bits at the cops during one of Portland’s (MostlyPeaceful™) riots.

If you don’t denounce Antifa’s violence, in the words of your own movement ‘silence is violence’. There is nothing meritorious in a movement whose goal is fomenting a communist revolution. That’s sedition.

She is a finalist candidate for the office of Mayor.

The other choice is the hapless clown we have today — the guy who refused to protect his citizens or permit the police to do their job and throw violent offenders in prison — has serious problems of his own.

His city is in flames, for one thing. And rather than doing anything about it — like Kenosha who eventually called in Federal help and quelled the insurrection — he is blaming Trump for his city’s problems.

And what happens when the angry mob shows up at HIS home in the middle of the night?

He turns tail and runs somewhere away. Probably to an unlisted address. In a gated community.

Many of his city’s other residents — and businesses — don’t have that same luxury.

You must be so proud.