Reports from around the world continue to show that Xi’s Omicron variant is mild but that’s not stopping Big Pharma from pushing more injections.

Big Pharma is not going to kill the cash cow now that variants mean more shots in arms.

On Wednesday, the CEO of BioNTech indicated that a 6-pack of shots would be recommended to deal with Xi’s Omicron variant.

On Thursday, Pfizer’s CEO, Albert Bourla, indicated that the “annual booster” — the fourth shot — that was expected to be given 12 months after the first booster dose may have to be moved up earlier than anticipated.

Albert Bourla, Pfizer’s chief executive, had projected that a fourth dose might be needed 12 months after a third shot. But he said on CNBC’s “Squawk Box” that the timeline might need to be moved up. One of the company’s top scientists recently said a fourth shot — possibly one targeting omicron — is likely to be necessary.
Source: Washington Post

“I think we will need a fourth dose. I have said that multiple times,” says @pfizer CEO @AlbertBourla on Israel’s roll out of a fourth Covid vaccine dose. “If there is a need for something different, better, we will be able to have it in months.” pic.twitter.com/FFA28uXgs7 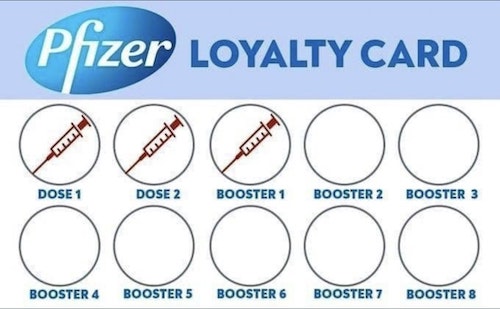 Bourla had told Savannah Guthrie on the TODAY show that three shots had proven effective against Xi’s Omicron, but…

“Three doses against omicron are almost equivalent to the two doses’ effectiveness we had against the original variant.” -Pfizer CEO @AlbertBourla to @SavannahGuthrie pic.twitter.com/Ly4cafCAmT

…the evidence appears to contradict that as more cases were found around the world in the last couple of weeks.

In an interview with the Wall Street Journal, Bourla had said that he thinks that the virus will be under control by the middle of next year.

Pfizer CEO Albert Bourla says he is hopeful that Covid-19 will be under control by the middle of next year, speaking at the #WSJCEOCouncil summit https://t.co/As6KqM1sSB pic.twitter.com/I74Ioc6qV2

Of course, there will still be a need for annual boosters for it to be “under control.”

Here’s CNBC Squawk Box host Joe Kernan asking Bourla about that and calling it an “annuity” for Pfizer.

Pfizer’s CEO on the need for endless boosters.

“I think we’re going to have an annual revaccination and that should be able to keep us really safe.”pic.twitter.com/SztSsLXymf

Here’s a live look at Bourla:

All of this is a far cry from what Bourla had said before the shot was given approval under emergency use authorization.

Jordan Schachtel tweeted out some reminders that Bourla had made some truly extraordinary claims about the shot early on that gave false hope that the shots would end the pandemic.

Yesterday he claimed that the third shot neutralizes Omicron, despite plenty of 3 shot compliant people getting it. https://t.co/QFC6SQjVGS

Always remember that these people told you they were selling a cure.

A CURE, not a seasonal remedy.

“They’re not bad people. They’re criminals because they have literally cost millions of lives.” pic.twitter.com/VjIXs5rQCg

So, I guess that means he should be held to account for dangling that false hope, hmmm?

Pfizer has also developed a therapeutic for treating severe infections of the China Virus and has inked a pretty sweet deal with the “Let’s Go Brandon” administration.

Let’s not forget that the “miracle” vaccine was announced just days after the 2020 election because Bourla didn’t see the need to rush things.

Pfizer’s CEO said he didn’t feel pressured to meet the Trump administration’s desired coronavirus vaccine timeline. “The election was always, for us, an artificial deadline,” Albert Bourla said at @dealbook’s summit. “It may have been important for the president, but not for us.” pic.twitter.com/J09vsoDZ6n

But he’s been very happy with the support of President Biden.

Pfizer CEO Albert Bourla: "From hour one of his presidency, and to be honest, well before the election, President Biden has demonstrated an understanding of the urgency of this pandemic." https://t.co/vgj7WXJ1Io pic.twitter.com/DkbKThzU5J

It’d be interesting to find out if Bourla has decided to suddenly invest in a budding new artist, wouldn’t it?

But hey, we’re not allowed to ask those kinds of questions.

Any article on Albert Bourla should include this fantastic clip of Human Events editor Jack Posobiec’s impressive impersonation of Bourla explaining how this “new normal” thing is going to look.

But you know, there was one guy that saw this new business model coming a mile away…